One of my favourite Who bloggers, Combom, has posted the following image which he discovered going through a local history book. 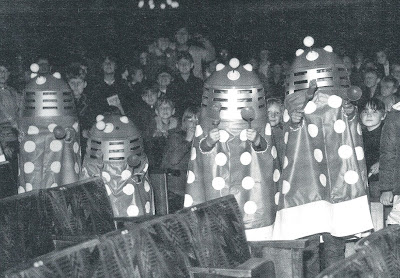 He asks if these are the costumes that were commerically available for kids at the time. The red Dalek 'playsuits' which are shown in the photograph were manufactured by Berwick in 1965 and sold for £3 6s 6d (£3.32). I guess they were popular Christas presents back in 1965, as part of the wave of 'Dalek-mania' mechandising which invaded the country. Surprisingly, considering their flimsy PVC looking nature, they still occasionally pop up on ebay and in collections, some complete with box and packaging. Below is a pic I captured off ebay some time ago - one sold for two hundred pounds in 2003. There is a link to another one here, currently for sale from Metropolis Vintage Toys, at a nice £675.

There's an odd little piece by a proud (?) owner of one of these playsuits back in the day here. Apparently, Marc Aldmond (lead singer of 1980's group Soft Cell), used to walk around wearing one! 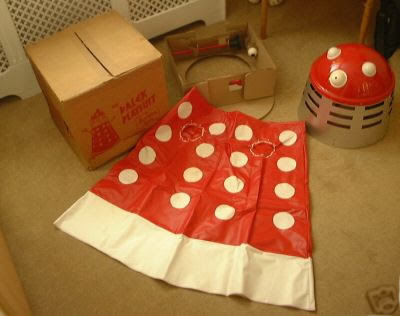 I've also found reference to an earlier blue Dalek playsuit, manufactured by Scorpion in 1964 (I think - need to check this!). 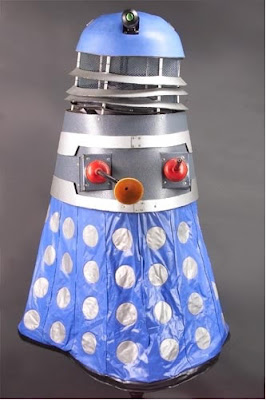 Photo from The Skaro Toy Musuem. Apparently this Dalek playsuit from Scorpion Automotives, complete with flashing eye, survives only in limited numbers as the factory that made them suffered a fire which destroyed nearly all their stock and many of the parts required to make the suits. Only a couple are still in existence. Should one come up for sale, expect a price tag of thousands rather than hundreds. An article here refers to one sold for £3,000 several years ago, and estimates a value of £5,000 (2008 price).

I dont know any more than this at the moment, but will add details to this post as I get them!
Posted by Magnus at 07:16

Magnus
More to the point, what's it all about? Me? Well no, not really. (OK, just a bit) But Who. Who? Doctor Who. What? No, not Doctor What, although he's here somewhere as well (or will be). Doctor Who, the typically British and uniquely odd BBC TV time-travelling series, which started way back in 1963 and is still going strong today. Blending the old and the new, aiming to bring you all the stuff you didn't know and even the stuff you didn't know you needed to know... and more! And me? A mad manic megalomaniac... with a dash of delusional paranoia, the ups and downs of a flip-flop, oh, and a constant headache... 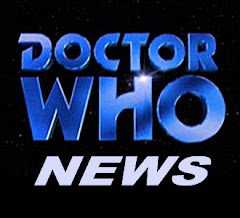